Located on Commercial Street, in the center of Provincetown, the recently renovated Town Hall, was not the very first Town Hall built in the town located on the tip of Cape Cod. The first Town Hall was located on HIgh Pole Hill and was built in 1853, but burned down in 1877.  The 22,000 square foot Victorian era 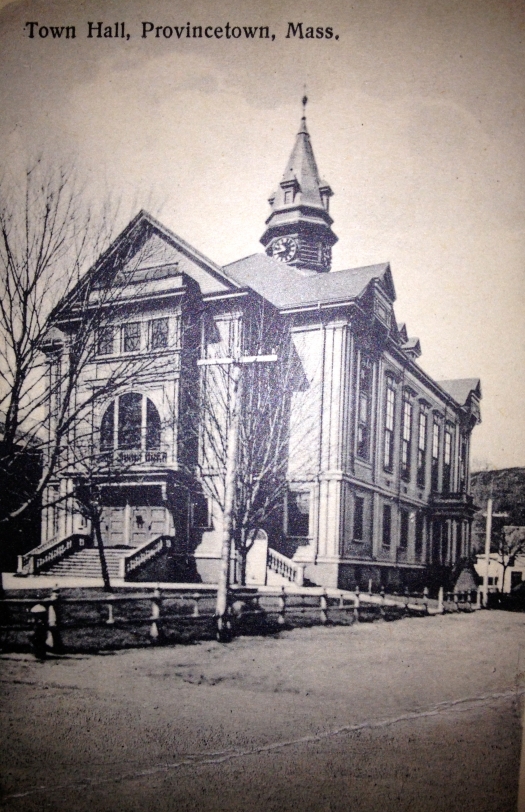 building, completed in 1886, was constructed to serve as a community gathering place.  Commonly in New England, town’s held their town meetings in churches until Town Halls were constructed to insure the separation of church and state. At one time or another the Provincetown Hall served many functions that included, dance hall, basketball court, and even rolller skating rink.
The Provincetown Art Association and Museum held their early art exhibitions at the Provincetown Town Hall until they were able to acquire and renovate a building of their own.  Along the way, the town amassed a significant art collection that includes two paintings by Charles Hawthorne, “The Crew of the Philomena Manta ” and “Fish Cleaners.” Hawthorne founded the Cape Cod School of Art in 1899.  Ross Moffet completed two murals in 1934 , “Gathering Beach Plums” and “Spreading Nets” funded by the Public Works of Art Project that helped many struggling artists during the Great Depression.

Visit the Provincetown Town  Hall when you visit the town and see many fine paintings hanging on the walls and in meeting rooms. And yes, the Town Hall does figure into the storyline of the new mystery novel Remaining in Provincetown. There is something going on between the newly hired Town Manager and the publisher and editor of the weekly newspaper. What could it be? Get your copy of the book just released last month and now available at local bookstores and online at Amazon.com in trade paperback and as an ebook. Like us on Facebook. Keep the conversation going.