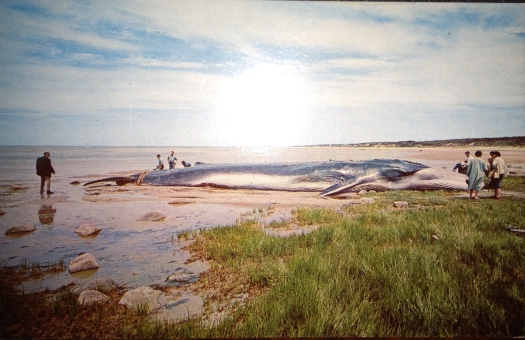 Beached Whale on the Brewster Flats

What causes whales to swim towards shore and strand themselves on land? It’s a mystery that scientists have been studying for years. On May 28th, 1963 a 56 foot Finback whale swam into the Brewster Flats. A team from the Woods Hole Oceanographic institution pushed off in an eight foot pram and herded it into deeper what. Unfortunately their efforts were in vain. The whale swam around the pram and drove itself back into the shallows where it eventually died. The photograph for postcard shown above was taken by John Schram and the postcard was published by Cape Cod Photos.   There are many mysteries in life and a mystery novel set on the tip of Cape Cod in Provincetown has people talking and waiting for a sequel.  Remaining in Provincetown by S.N. Cook available online and at your favorite bookstores, “captures the characters and places perfectly” says one online reader review. Check it out for yourself. Like us on Facebook and keep the conversation going!