At the time this postcard was printed and mailed, there was still a train that traveled the length of Cape Cod, all the way to Provincetown.  While Provincetown quickly became a bustling and densely populated settlement, Truro has remained primarily rural.  One of its fine features are the expansive sand dunes, marshes, and the Pamet River, shown in the above postcard.

As the sequel to the mystery novel, “Remaining in Provincetown” opens, Len Milbury is going for a run from the Truro Town Center Post Office to Ballston Beach on the road that runs parallel to The Pamet River.  In his backpack he carries a letter.  Is it a clue?

While the book’s title has not been finalized,  there is another book that follows “Remaining in Provincetown”.  In it you”ll get a chance to read more about the the lives and adventures of Frank Chambers and Roz Silva. But maybe you haven’t read the first book yet in which case, please do.  A new batch of autographed copies are about to arrive at The Provincetown Bookstore at 246 Commercial Street. And if you aren’t going to be in Provincetown, then you can always order the book online as a trade paperback or ebook.

The scene in the above antique postcard shows the center of Provincetown, Cape Cod, and its Town Hall. Notice there are no benches in front of Town Hall. They were added mid 20th century. Those benches have become known as the “Meat Rack” for two reasons. During the daytime it’s a place to watch everyone walking by and check out who is in town. At night, particularly after the bars close,  it’ a meet-up spot for singles, particularly gay men looking to run into an old friend or meet someone new.   In the recently released mystery novel Remaining in Provincetown, with all -the clandestine meetings between the Publisher/Editor of the weekly newspaper and the Town Manager–there’s a fair amount of action that takes place near and around Town Hall.

Also notable in this photograph is the view of the Congregational Church, as it originally appeared before it became a movie theater (the old Art Cinema) and then shops, a sidewalk cafe, bakery, and restaurant — during the 20th century. Want to read a book that “captures the town to a T” ? Pick up a copy of Remaining in Provincetown by S.N. Cook available at  bookstores including The Provincetown Bookshop and online in trade paperback and on kindle. Like us on Facebook and keep the conversation going. 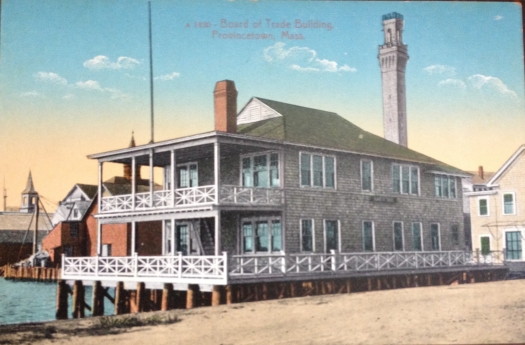 Beautiful beaches, a monument to climb, numerous art galleries and shops to visit, all make Provincetown the gem of Cape Cod. Shown above in this antique postcard is the Board of Trade Building, founded in 1899, which became incorporated a the Provincetown Chamber of Commerce in 1957. If you arrive by Boat, it should be the first place you stop, located at the base of MacMillan Pier, for tourist information. The Mission of the Provincetown Chamber of Commerce  “This organization shall encourage and promote the civic, commercial, and social betterment of the Town of Provincetown for residents and visitors.”

There’s a lot of do for visitors, whatever your sexual orientation. Provincetown has always been a town where you can be yourself. Ever wonder what the town is like in the off season when all the tourists have gone home? Read the new mystery novel Remaining in Provincetown by S.N. Cook, sold at stores and online at  the Provincetown Bookshop and at Amazon in trade paperback on kindle. Like us on Facebook. Keep the conversation going. 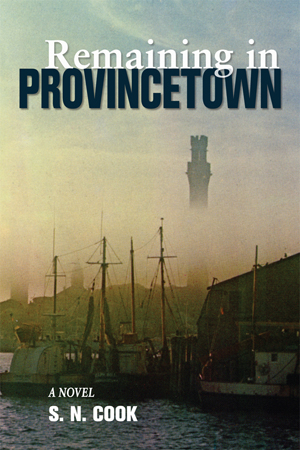 Provincetown, that enigmatic town on the tip of Cape Cod, is part of the title of the newly released murder mystery Remaining in Provincetown, and it is the core focus of a perfect mystery lite.  A story that delves into the thoughts, fears, and aspirations of a medley of characters as varied in their socio-economic and sexual orientations as the town in which they reside.

Roz Silva, is the power hungry publisher/editor of the town’s (fictitious) weekly newspaper The Provincetown Observer. Widowed three years earlier, with two teenage daughters, she is attractive and lonely—so lonely she’s been carrying on what she thinks is a secret love affair with the new town manager, who just happens to be married. But in a small town, there are no secrets.  Certainly talented and sensitive Frank Chambers, a chef and owner of the highly regarded Indigo Inn, knows of Roz’s indiscretions and he’s not going to pass judgment on who she sleeps with when he is too busy worrying how to get his restaurant staffed for the upcoming season and whether the HIV virus he’s carrying will develop into a full blown case of AIDS.  But he and his good friend Bruno, an Innkeeper with a weakness for young boys, do know one thing, they don’t like Roz and they want to start an alternative publication—a magazine.

And then there is the murder. Sonny Carreiro, Portuguese American native son, insurance agent, and real estate developer is mysteriously shot in front of his home on a Sunday evening and there are no witnesses. But there are plenty of suspects. He’s been separated from his wife Sarah for several months. Why did she leave him? He’s not on speaking terms with his business partner Beau Costa. Where was Beau on Sunday night?  Who in Sonny’s past, may have a score to settle?

Set in the early 1990s in a version of Provincetown which contains many actual businesses and locations used in a fictional context along with newly created places and situations that may feel oddly familiar, the book brings to life a town known for its beauty and the unique diversity of its inhabitants.  Available online at Amazon.com and at local bookstores in trade paperback, 306 pages $12.95 retail or as a kindle ebook, it is destined to become a mystery classic.

Provincetown’s Commercial Street is unpaved and the sidewalks are made of wood, but the houses look very much the same as they do today. in this antique postcard printed 100 years ago.

Every town has its East End and West End and Provincetown, with its  long and narrow in configuration, is no different. The East End on the waterside has traditionally been populated with seasonal summer residents.  Famous artists like Robert Motherwell and  Helen Frankenthaler constructed a grand residence on the  East End waterfront, but others of more modest means stayed in historic Cape Cod cottages.  Empty lots are few and far between, when waterfront land is so valuable, but take a walk at the start of town, at the point where Commercial Street and Bradford Street divide, and see many beautiful old homes, primarily built in the beginning of the 20th century. What kinds of houses do the characters in Remaining in Provincetown live in? Real estate speculation has played a major role in Cape Cod’s economic development and where there is money to be made there is often graft and corruption. Could that kind of corruption lead to murder? You’ll have to read the  book to find out. Now available at Amazon in trade paperback or on kindle as an ebook. Like us on Facebook and be entered to win a FREE book and thank you for all the positive feedback

Now called The Crown & Anchor, the New Central House was a popular Provincetown Inn in the 19th century and  today is a  “happening place”.

The handsome waterfront Provincetown Inn located in the center of Provincetown on Commercial Street has gone by many names. In the antique postcard shown above it is called “New Central House”. Said to have been built in 1836 as the Central Hotel by 1868 it was considered the largest hotel at the tip of Cape Cod, with 75 guest rooms.  A private beach with cabanas and long porches with rocking chairs for guests to sit out and look at the water, made this Inn a successful business that kept expanding through its many incarnations. Its been called: Ocean House, Central House, New Central House, Towne House, the Sea Horse Inn. and the Crown & Anchor as it is known today.  At the end of the 19th century it catered to prosperous guests by providing a  billiard hall, smoking rooms, gentleman’s parlor, and ladies’ reading room for a mixed clientele of families and primarily straight travelers. But as the town evolved into a mecca for gay travelers, it gradually evolved into a thriving complex of bars and restaurants that cater to gay and lesbian patrons of varying tastes.   Although the Crown & Anchor was burned to the ground in 1998 when adjacent Whaler’s Wharf burned as well, it was faithfully rebuilt in its previous architectural style. The leather bar is known as The Vault and the restaurant Central House at the Crown pays tribute to its earlier years by using the earlier name of the hotel. while  the Paramount Nightclub, Piano Bar, Wave Video Bar and more make certain there is always a party going on somewhere.   Places to have a good time are an important aspect of life in Provincetown, whether you are a tourist or a resident, and in the new mystery novel Remaining in Provincetown a popular hang-out is the fictitious “Cowboy Club”. Want to learn more about what goes on there? You’ll have to read the book now available at Amazon.com and as an ebook on Kindle. Like our Facebook page and you may win a FREE copy.