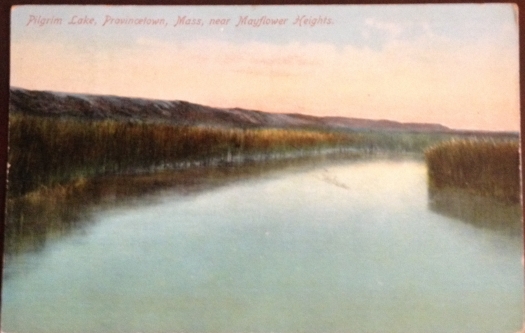 This postcard shows what Pilgrim Lake looked like approximately 120 years ago, but it had already undergone many changes.

Once known historically as Eastern Harbor and later as East Harbor, the protected inlet was eventually diked in 1868 to make it possible for track to be laid for the railroad that made Provincetown into a thriving hub for fishing. The railroad took the fish from the Provincetown Wharf all the way to New York City.

But in building a railroad and a roadway in 1877, East Harbor became a lake known as Pilgrim Lake.

What’s interesting in this old postcard is that the dunes look fairly low and the vegetation is high. The vegetation is what caused the desalination. The fish population gradually depleted although in the mid 20th century there were reports of large terrapin turtles that lived in the lake. What did they eat?

The vegetation and wildlife continues to evolve as the National Park Service attempts to restore portions of the habitat.

What happens next? Only time will tell. Life is often a mystery.

Want to read a novel set in Provincetown? Remaining in Provincetown, “captures the characters and places perfectly,” says one reader review. “Finally an author has been able to successfully capture the flavor of that quirky town on the tip of Cape Cod and do it well,” says another. Available at Provinetown’s favorite local bookstore, Provincetown Bookshop,  or online as a paperback or ebook you’ll want to read Remaining in Provincetown by S.N. Cook to get you ready for summer 2014. Like it on Facebook and keep the conversation going.