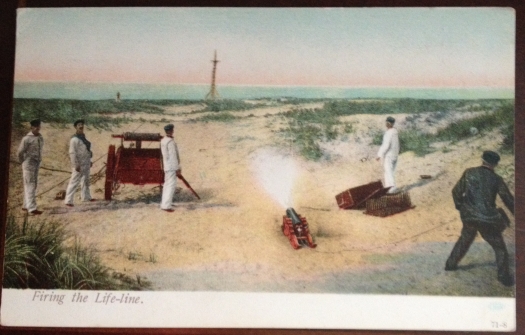 The United States Lifesaving Service was founded in 1871 after an alarming number of fatalities occurred along the Atlantic coast during the winters of 1870 and 1871.

The stations were manned by expert surf men and boat handlers who patrolled the coast at night and during foggy and stormy days.  The buildings where equipment was stored were painted red so they could be seen from the sea and a sixty foot flagstaff signaled  passing ships by International code.

Nine lifesaving stations were built on Cape Cod in 1872. Captain Samuel O. Fisher was one of the Race Point station’s keepers and he had a horse that would help the crew by dragging the heavy boats and equipment across the sand.  Postcards that show the work of the early Cape Cod Lifesaving Service are highly desirable. It was a these types of antique postcards that Sonny Carreiro was looking at before he drives back to Provincetown and is inexplicably murdered. Want to know more about the mystery? Read the new novel, Remaining in Provincetown by S.N. Cook available at bookstores, including signed copies at the Provincetown Bookshop and online in trade paperback and as an ebook.Like us on Facebook and keep the conversation going. 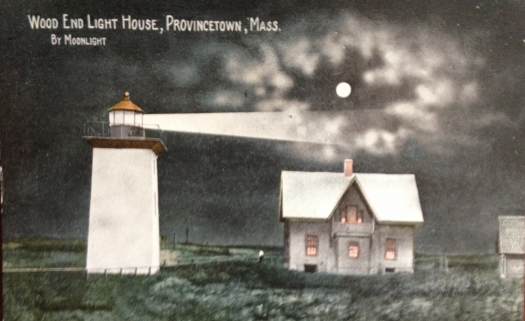 These two antique postcards show Wood End Lighthouse in Provincetown at the tip of Cape Cod by night and by day.  Completed in 1872, joining nearby Long Point lighthouse and Race Point  Lighthouse., which were both established in  1826.   Before the  30 foot tall brick tower was erected, there was a  pyramidal beacon established in its location in 1864. The new lighthouse put into service in 1872 had a Fresnel lens that flashed every 15 seconds along with an adjacent light keepers dwelling. Congress had appropriated $25,000 in the 1872 federal budget for Wood End lighthouse to help stem the number of ships being wrecked off the  furthermost tip of Cape Cod.

Not accessible by any road, one way to visit the Wood End  Lighthouse is to walk across the breakwater by the Provincetown Inn. This past October the Cape Cod chapter of the Lighthouse Foundation, repainted the handsome antique lighthouse which was automated in 1961 and was converted to solar power in 1981.

Despite the establishment of three lighthouses on the tip of Cape Cod, ships still were wrecked on the sand bars near Provincetown. In 1872 a life saving station was set up at Race Point and another one added at Wood End  in 1896. If you have read the book Remaining in Provincetown, you might remember that postcard collector Sonny Carreiro was particularly interested in antique postcards related to the Lifesaving stations. Haven’t read the book? It’s available at the Provincetown Bookshop and online at Amazon and other booksellers in trade paperback and as an ebook.  Like us on Facebook and become part of the conversation about this new mystery novel where Provincetown plays the starring role. 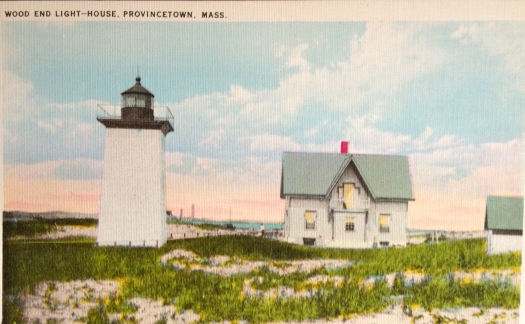