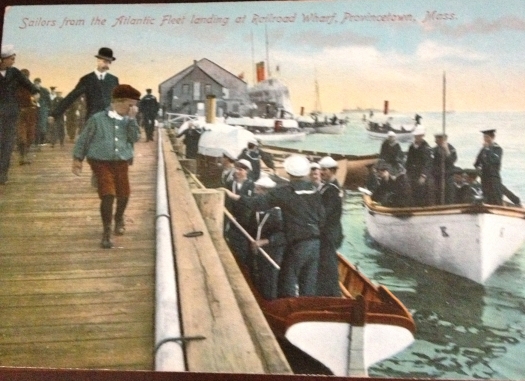 Many of the antique postcards that depict Provincetown, the wonderful small town on the tip of Cape Cod, with sailors walking the streets. The reason for this is because one of the most important events in the town during  both 1907 and 1910 was the construction and subsequent dedication of the Pilgrim Monument. In 1907 when the first cornerstone was laid, President Theodore Roosevelt was in attendance. Subsequently in 1910 when the monument was dedicated, the ceremonies were presided over  by President William Howard Taft. At both events the entire Atlantic Fleet of the United States Navy was in Provincetown harbor for the ceremonies. That’s a lot of sailors. The above postcard shows sailors landing at Railroad Wharf. No sailors walk the streets in the new murder mystery novel Remaining in Provincetown by S.N. Cook but several of the characters are interested  in history and tradition. Pick up a copy at your favorite bookstore or order it online at Amazon.com in trade paperback or on kindle. Like us on Facebook and keep the conversation going.