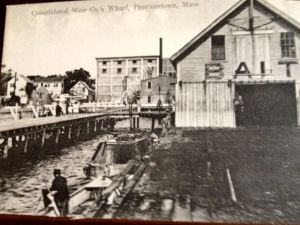 When fishing was a major  industry on Cape Cod, there were fishing weirs, nets set up in the water used to trap fish. The use of weirs for fishing was a Native American technique that was taught to the early colonists in New England. Could the name Consolidated Weir Company name have something to do with the use of weirs?  While weirs were a frequent sight in the harbor during the early part of the 20th century, they were abandoned or removed  by the late 1960s. This was long before I was born but I do recognize a building in the background that provides a clue to where this long ago wharf in Provincetown was located. The building was on the East End of town, the old ice house which provided the ice for packing the fresh caught fish for storage and transport. Visit Provincetown today and in its place is a stucco and brick building. All that are left of the wharfs on beach side are a few wood pilings.